In science fiction, some of the interactions between aliens and humans have become tropes. Tropes can be symbolic and helpful for our understanding of plot and character in a fast-paced movie or show. We can use them, bend them, or try to avoid them.

For alien-human interactions, we have the classic tropes of:

·         War of the Worlds type aliens who want to kill/enslave humanity and takeover Earth. There are so many variations on this one it’s hard to name them all, but here are a few: Independence Day, Annihilation, Avengers, Invasion of the Body Snatchers, Spectral, Pacific Rim, Starship Troopers, Edge of Tomorrow, Predator.

·         There are the peaceful, more advanced and powerful aliens who want to help humanity. Examples include: Arrival, Close Encounters of the Third Kind.

·         Avatar by James Cameron offers the rare depiction where the humans are the aggressors.

·         Aliens who spy on humanity or pass us by, not considering us worthy “yet” of their attention. Examples of this include: The Hitch-Hiker’s Guide to the Galaxy, The Cat from Outer space.

·         Aliens and humans struggle to understand one another. Examples: Star Trek, Men in Black, Guardians of the Galaxy, Galaxy Quest, Babylon 5, Farscape, Stargate.

What kind of alien-human interactions do you like best in science fiction movies and television shows? Have any movies/shows to add?

A spaceship in disguise,

An Earth girl searching for a sense of home,

And a Thousand Years’ War between alien races,

All collide on a summer afternoon.

An old movie theater welcomes Amaya in and wraps her up in the smell of popcorn and licorice. But one sunny afternoon during a matinee, the movie screen goes dark. The theater rumbles.

Amaya gets trapped in the middle of an ancient alien conflict. Angry and frightened, Amaya entangles herself in a life-changing cultural misunderstanding with Sol, a young alien who keeps omitting key information, even while they’re on the run from his enemies.

What will it take to survive a battle between alien races involved in an ancient war?

Liftoff is a fast-paced read for fans of Code 8, Guardians of the Galaxy, and Cobra Kai. 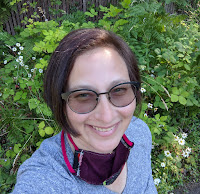 About the Author: Tyrean Martinson is an author and teacher from Washington State. As a former fencer and kickboxer, she enjoys writing fight scenes in fast-paced novels and novellas. As a teacher and writing tutor, she loves to get students writing and reading comfortably by any means: talk-to-text, short writing assignments, short stories, novellas, and adventures. She wrote her latest novella, Liftoff, for herself during COVID, but realized it also fits a dream she’s had for a while: to create a short, fast-paced read for teen/YA readers who love popcorn movies, adventure, and sweet romance.