You all know I love dragons but today I'm using my blog to introduce Jay Noel's upcoming release. I still haven't figured out if dragonflies are actually creatures who dared to drink the blood of dragons like horseflies bite horses. Dragonflies are beautiful, exotic looking insects though and a warrior named after them really catches my interest. And steampunk  in the wild west is one of my favorites. Check out Jay's blurb and add this one to your wish list. 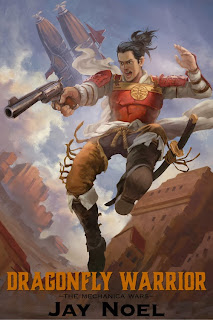 The Mechanica Wars: Savage Machines Are Afoot...
At the age of twenty, Kanze Zenjiro's bloody footprints mark the bodies of those who stood in his way to protect the throne of Nihon. Now, the tyrannical Iberian Empire is bent on destroying his kingdom, and they send their steam-powered giants and iron spiders against him.
Zen embarks on a quest that takes him on the most dangerous journey of his life. To succeed, Zen must live up to his nickname, the Dragonfly Warrior, and kill all his enemies with only a sword and a pair of six-guns. He is called upon to somehow survive a test of faith and loyalty in a world so cruel and merciless, it borders on madness.

Book Information: Dragonfly Warrior is a steampunk adventure like no other. It's a dynamic mix of Asian and European mythology, the Wild West, martial arts, traditional fantasy, and high powered steam action that will keep you turning the pages.
Dragonfly Warrior is the first book of The Mechanica Wars, and will debut on January 6, 2014.

Author Bio:
After doing some freelance writing and editing for more than a dozen years, Jay decided to stop procrastinating and pursue his dream of being a novelist. He's been blogging for over eight years, and even had a comedy podcast syndicated all over the internet. All of that was fun, but all the steampunk-inspired stories in his head just wouldn't leave him alone. Jay spends his days working in medical sales, but he can be found toiling over his laptop late at night when all is quiet.
He draws inspiration from all over: H.G. Wells, Jules Verne, Shakespeare, Ray Bradbury, Douglas Adams, and Isaac Asimov.

And Jay loves cookies.
Jay's Website
Jay on Facebook
Jay on Twitter
Jay's book is out in January, a perfect time to add it to your new tablet or ereader you're getting for Christmas. His cover caught the eye of my youngest son. I'm always looking for reads for him.
Have you seen Jay's cover elsewhere in the last week? Can you believe he has time to write with everything else he does? Have you liked his facebook page and followed him on twitter yet?
Don't forget IWSG tomorrow.
Posted by Susan Gourley/Kelley at 3:30 AM