Today the second book in my Warriors of Gaviron science fiction romance series is available on Amazon and all other major retailers. The Warrior and the Governor has been having pretty good pre-sales so I can't help but hope it takes off like the first book did. 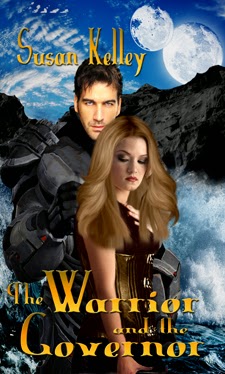 Gaviron Warrior Liam lost the love of his life when his planet fell to the alien monsters twelve years ago. All he wants in life is a chance to take the murdering raynid creatures with him in death. Governor Siva Handel will make any bargain to save what's left of her desperate colony even take in a suicidal warrior. Liam's warrior skills give Siva hope as he throws his body between her people and the raynids. But can she keep him alive long enough for them to win and for him to find a reason to survive?

Every time I have a new book release, I think of how much I appreciate the readers who take the time to write a review. It's so helpful for us 'not so famous' writers to have those honest evaluations of our books out there.

I wanted to thank a new blogging friend, Dumcho Wangdi. Last week he honored me with The Very Inspiring Blogger Award. Since I received this award before, I won't be passing it on but I would like thank Dumcho for thinking of me. I hope you'll visit his blog and say hello.

Along the home front, Monday started out with a bit of snow. My oldest son is a teacher and coach. I've missed him since he's moved out to his own home but whenever we get together, we usually talk about our favorite books. We both needed our cars inspected this month so it was his idea that we meet at the car dealer and then wait for the service to be done at Starbucks and the nearby bookstore together. It was a lovely mom/son time and the best part was that it was his idea. Like me, he loves his alone time so it was precious that he elected to spend some with me.

After that comforting time, I had to remind my daughter living in Boston to charge her phone, get some food into her room and stay in touch for the next two days. The three blocks to the dining hall would be a tough trek in three feet of snow and a blizzard. Mom's work is never done.

I hope lots of you signed up for Blogging From A to Z Challenge. Last year I served as a minion to Alex J. Cavanaugh. This year as one of the leaders. I need my own helpers. Please let me know by email or in the comments if you'd like to be my helper. Jeremy is making me the most incredible minion badge, I promise you will want it for on your blog sidebar.

Did you get stuck in the blizzard? Do you write reviews after enjoying a book? Joining A to Z? Willing to help me out?


Posted by Susan Gourley/Kelley at 4:30 AM

Email ThisBlogThis!Share to TwitterShare to FacebookShare to Pinterest
Labels: Dumcho Wangdi, The Warrior and the Governor, Warriors of Gaviron