I'm excited to have LV Barat here as my guest today. Her topic is so intriguing as she discusses the way myths have influenced not just her writing but also, you'll see how it worked its way into the work of many fantasy authors. I can imagine sitting in an hours long workshop and hearing more about this subject from this expert. You can learn more about her and her book at LV's Blog.

Influence of Mythology and Ancient Spiritual Practices in the Trilogy: “Tears of Gods and Dragons”

Creative Technique
For many years, I have practiced Kundalini Yoga and Celtic shamanism.  In addition, I studied the rich mythological histories of India and Europe. In shamanic journeying, one is taught trance techniques to open the door “between the worlds”.  In the beginning of the journey, much is one’s own imagination but then things begin to happen that are not initiated by the practitioner’s own mind. A person may meet with nature spirits, elementals, an animal and/or spirit guide.

When I write, I go into a semi-trance and try to access that other world to let the impressions through. The first draft is written this way. For the second draft, I restructure the story and impose consistency in the storytelling and character development. Then I sit on the manuscript for a week or two, before returning to edit it once more.

In my first novel, “Eyeof the Hawk”, I incorporated European and Vedic myths. Hawk, the main character, is a shapeshifter.

Shapeshifting runs through myths of every culture. One method is where the shapeshifter controls the mind of an animal and guides it. The second method involves the transformation of the physical form. However, this is a misinterpretation. What the ancients actually transformed was their astral body also called the linga sarira in Tibet and India. That is the origin of the legends of witches flying on their broomsticks. The story of the werewolf is one of shapeshifting, in this case during the full Moon.

The Sacred Dragons
Dragons are also prevalent in myths around the world.  In Europe, dragons are usually guarding an object of immense power and taming the dragon is much preferable to slaying it. Snakes and dragons are interchangeable in some myths. Snakes feature prominently in Egypt and India. In Egyptian hieroglyphs, pharaohs and priests are depicted with a cobra emerging from the forehead, or the third eye center, denoting the risen serpent. In Europe, the druids were “naddreds” which means “snake priests”. In India, the naga sadhus worship Lord Shiva, he with the cobra around his neck.

What does the dragon/snake represent? It is not an outer dragon but an inner dragon. In India, the snake is called Kundalini. The serpent power lies dormant in the base chakra of the astral body. Yogis perform yoga and breathe exercises to awaken the serpent and raise it through the spinal column. Supposedly, when the serpent is awakened, there are various psychic experiences and mastery over the subtle elements: earth, water, fire and air. 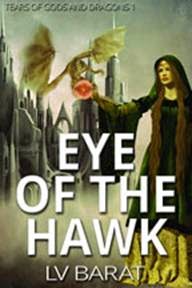 In “Eye of the Hawk”, Hawk is a healer and tries to heal Lananell in the beginning of the story but he encounters a block. What Hawk feels is her serpent power locked down below her navel.

Hawk is sent on a mission given to him in riddles by his mentor, Akrae. Riddles and rhymes were often used to teach matters of spirituality. In Zen Buddhism, they teach with Koans, a type of riddle or parable. In druidic Ireland, a bard would teach with rhymes and song. The riddle places a conundrum before the mind and the person is forced to think out of the box, each individual forming their impression of the meaning based on their own unique perspective. Learning through riddles activates the subconscious, so the lesson learned through the riddle will not be forgotten. Mysteries stimulate the mind and imagination, facts diminish it. Soothsayers often prophesize in riddles because that which is explained completely, ceases to exist.

LV Barat has been writing fiction and non-fiction for twenty years. Epic fantasy is her genre of choice whilst some suspenseful mystery has managed to worm its way into her opus corpus.
LV Barat lives in the Rocky Mountains, the spine of North America. An enchanted place of glistening pine needles, massive boulders, jutting gray crags, stealthy red foxes and antlered elk.

Didn't the riddle part remind you of The Hobbit? Did you know that snakes and dragons were so often considered the same creature in some cultures? Do you use yoga to waken your inner dragon?

Posted by Susan Gourley/Kelley at 1:30 AM