I'm so pleased to have Misty Simon, a long-time writing friend and successful, prolific writer. There's no one quite like Misty to lift your mood when the business of writing is getting you down.

Hi there and thanks so much to Sue for having me on this great blog!

I’ve been a writer for quite some time, published since 2004 or so when I won a contest with Harlequin when they used to run Writing Round Robins. I loved writing for years but reading even longer. Getting lost in a story is one of the greatest joys of life. I’d get in trouble for getting a little too lost in a story when I was supposed to be reading a textbook and instead had a romance between the pages of the book. Funny enough, one of the classes I read the most in was English. I met my English teacher years later in an airport, totally random, and we laughed about the memory, though she did read my book and then critique and grade me shortly after. I got a 94%, not perfect, but in her class that was about the most you could get so I took it and laughed and laughed.

But it’s not always all laughter with writing. Recently I was really struggling with a book concept. I’ve been trying to come up with a new series and wanted it to be different from the other two mystery series I have written. I kept running up against walls and being turned around by a tornado of doubt. I doubted my process, my ability, my smarts when it came to writing in general and especially when writing mysteries. But I was determined and nothing gets in my way when I dig in my claws. So I kept working with it and after many twists and turns, going back to the writing books I’d read when I wrote my first mystery in 2004, and pacing so much the dogs were tired from following me, I did it! And a new series was born. I wrote the partial and it’s ready to be sent to my agent. And while I wait for that, I’m writing the next Tallie Graver Mystery with glee and with the absolutely knowledge that no matter how far down the rabbit hole of doubt I get, I can always find my way out.

In anticipation of that book coming out, here’s the current one that just had its debut on 11/27! 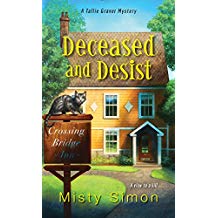 Window of opportunity . . .
Most house cleaners don’t do windows, but Tallie Graver loves leaving a pane of glass streak-free and sparkling. After a dirty divorce from a filthy-rich jerk, she's started her own cleaning business to make ends meet. On her latest job, prepping a renovated bed and breakfast for a grand re-opening, she's standing outside on a ladder, wiping off a grimy pane, when she spies a man on a bed through the glass. But the B&B isn't open for business yet—and the man's not sleeping. Her family owns the Graver Funeral Home, so Tallie knows a corpse when she sees one.

The victim is a shady building inspector with a reputation for handing out passing grades for a greased palm. With the local police resistant, Tallie launches her own investigation, before she gets a rep as a town crank. But it's going to take more than a squirt bottle and a squeegee to clean up this mess. With the help of her gal pal Gina, Tallie searches for a killer's motive. But she'd better be careful, or it'll be curtains for this window cleaner . . .

Misty Simon always wanted to be a storyteller…preferably behind a Muppet Animal was number one, followed closely by Sherlock Hemlock… Since that dream didn’t come true, she began writing stories to share her world with readers, one laugh at a time. She knows how to hula, was classically trained to sing opera, co-wrote her high school Alma Mater, and can’t touch raw wood. Never hand her a Dixie cup with that wooden spoon/paddle thing. It’s not pretty.

Touching people’s hearts and funny bones are two of her favorite things, and she hopes everyone at least snickers in the right places when reading her books. She lives with her husband, daughter, and two insane dogs in Central Pennsylvania where she is hard at work on her next novel or three. She loves to hear from readers so drop her a line at misty@mistysimon.com.
Connect with Misty:
Facebook https://www.facebook.com/misty.simon.18
Twitter https://twitter.com/MistySimon

I'll be back next Wednesday for IWSG. Read and stay warm until then, fans.