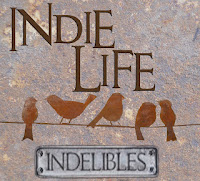 It's the second Wednesday which means it's time for Indie Life blogfest. Thanks to the Indelibles for starting and running this group. Once a month we reach out to each other to give and receive support. There are many more writers publishing by themselves or working with a small, independent press than there are traditionally published authors.

If you've been in this field for long, you'll either experience for yourself or know someone who has worked with a publisher who either goes belly up or that changes their course. Changing course is publisher speak for dumping an author. I've experienced both. Having a publisher you've signed a contact with go bankrupt is a long, drawn out headache as you try to get your rights back. It can take years. It took me nearly a year to get my two books back, neither had made it as far a being released, and I did find a home for that series with another publisher. I've also had the misfortune to have a publisher 'change course' to concentrate on celebrity books and books written by celebrities. It was infuriating but that's another story. I self-published that series after I had my rights returned. But an author friend of mine for the same company rewrote the second book in his series and started a brand new thriller series with a new publisher.

Don Helin, author of Devil's Den, is a perfect example of an author who had a setback but instead of giving up, he reached out and took control. Don found an independent press who he was comfortable working with and who had the professional reputation he sought to bring his work to the world. I recently attended one of Don's booksigning at the local BAM. He's a happy writer, doing what he loves.

I also found a new publisher for my newest fantasy series not too long after Don found his. We had talked many times about what we should do after that first publisher kicked us to the curb. What we both agreed on was not to give up. There are lots of wonderful indie presses out there run by talented publishing professionals. If you are looking for a publisher, talk to other writers, investigate your options and never, ever give up.  Don didn't and he's smiling with success.

Today is also Movie quote day at Alex Cavanaugh's fun blog. The focus today is computer-animated movies. I'm without an idea. I'll probably see lots of good candidates when I check out others' offerings but I seldom watch any animation since my kids are grown. But you can check it out or give me some suggestions.

Have you ever had a publisher go bankrupt or drop your line or genre? What animation are you watching?
Posted by Susan Gourley/Kelley at 6:00 AM