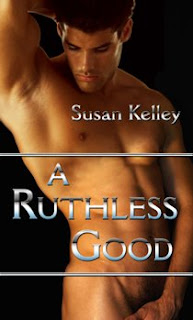 Yesterday I finally received the print copies of my latest release, A Ruthless Good. I was busy doing some major cleaning in a spare bedroom and didn't even realize the books had been delivered. I took a break to get my mail and there were the boxes on the front porch. I didn't open them right away but went back to my cleaning.
Then when I was ready to sit down and get back to my WIP, I finally opened the boxes. There it was, my work in print again. A book in my hands, everyword my own. The dedication in the front and bio in the back, all my own creation. I have three books already released and four more under contract. Will it ever get old? Will the thrill of holding those books in my hands go away? I hope not. Even if I eventually sell over a hundred books, I hope I still get excited to open those boxes and lift out the first, perfect shining copy.
My romance books sell more in ebook format than they do in print and maybe someday all books will be ebooks. I don't think that will happen during my writing career. I expect to savor more boxes of books and the scent that wafts up when I cut away that packing tape. Now all I have to do is figure out what I'll do with this cover during booksignings. I'm not sure how it would go over in a library.
Posted by Susan Gourley/Kelley at 7:49 PM 3 comments:

Email ThisBlogThis!Share to TwitterShare to FacebookShare to Pinterest
Labels: Futuristic Romance, Print books vs ebooks, The Chronicles of Solonia

To Group or Not to Group

This past week, a member of our local chapter of RWA decided not to join the national organization this year which of course means she can't belong to our local group, CPRW. It was kind of sad but also completely understandable. Marie contributed a lot to our group and was supportive to all of us. But there were economic factors to be considered.
Belonging to RWA isn't cheap. Marie has her first YA novel coming out in the near future so she wasn't really a romance writer. At some point she weighed her options and decided she could better spend that big chunk of dues money elsewhere. How many more of us will be making such tough decisions in the future?
I admit to considering it. Though I have three romance novels published with New Concepts Publishing, one contracted with them and another contracted with TWRP, I'm concentrating on my fantasy writing. Would I miss whatever I get from RWA if I left? I'm not sure but I don't think I would. Would I miss what I get from CPRW? Absolutely. Unconditional support, a fount of wisdom from fellow writers, and the companionship of those who know what being a writer is.
I also belong to Pennwriters and have found support there not only in the yearly conferences but in other functions as well as their member loop. In Pennwriters I also have a chance to spend time with other fantasy authors. Recently I joined with some other local Pennwriters in forming a group blog, The Susquehanna Writers, and planning some group book signings. And Pennwriters is cheap compared to RWA.
So yes, I've been tempted to leave RWA like my friend Marie but I can't give up CPRW. Yet. I could change my mind in the future but for now I'll stay. The same issues causing controversy with Romance Writers of America plagues many writers groups. What to do with digital publishing? Where is the line between published and not? Is the group meeting the needs of all their members?
I write because I enjoy it and of course I hope to be wildly successful someday. My day job has lots of issues, stresses, politics and frustrations. I don't need that same kind of thing in my writing career. I've avoided posting about the discussions on RWA and really have followed it as little as possible. I don't have the time or the interest. I never get involved in the contentious discussions that come up on Pennwriters every few months about epublishing versus traditional, agent versus unagented and all the things that go around over and over again. I don't even read the posts when the arguments start.
I want to be a writer. I want to smooze with other writers. I want to help my colleagues if I can and know I can go to them for help. Mostly I just want to write the best book I can write.
Posted by Susan Gourley/Kelley at 8:38 PM 7 comments:

I'm not getting much done on my writing this week, but I did get that wallpaper removed last week as I promised myself I would. And it was even worse than I'd feared. Twenty hours of frustrating work revealed a wall that should never have been exposed to the light of day. Read more about how that experience related to my writing life at this blog post. Fortunately, my husband does commercial and residential painting. Using a many step process, he somehow made those walls look like a new room. Still with all the help I've been giving him, I haven't done much writing. I'm about 10K into rewrites on Tiger's Mate, but I'm so tired in the evenings I can't seem to get much done.
And (my next excuse) my children's softball and baseball seasons are coming to a close and taking up a lot of time. They have been exciting games though.
I'm using the same excuse for not getting my website updated. I did work out though. My daughter helps me keep at that as she works out in anticipation of the fall field hockey season.
Vacation plans are looking more and more unlikely to come together as the summer progresses. If you want to know how the state budge impasse affects people like, I have two sons in college this fall and their tuition is going up. No one knows how much yet, but Penn State isn't getting any money apparently and it could be up to a 10% increase in tuition. There goes summer vacation for us. The college has to send their bills out this week at the latest so they're guessing how much they need to increase since they don't know what they're getting from the state. They're guessing at the upper end of needed increase. No surprise.
So I better get back to writing. Even my little bit of writing income is needed to help this year. If only that movie deal would come through. LOL
Posted by Susan Gourley/Kelley at 9:03 PM 3 comments:

Didn't quite get all those goals this week. I only missed one though. I didn't get the wall paper done or the fence fixed, but I have a good reason. My husband was home. Now how does that make sense? If you knew my husband, you would know it is impossible to start such a project with him around. He really is handyman-challenged. His patience is less than zero. So this week, I'm putting that goal back on my agenda.
#1. I am going to remove that wall paper.
#2. I'm going to work out no less than four days.
#3. I'm do a little update on my webside.
#4. I'm going to start working on Tiger's Mate, book 2 in the series I have started with TWRP/

I've put my writing goal last this week because I must get that wall paper completed. I usually don't do this, but this week I must. Also, I've already met my June goals for CPRW. Our groups sets these for each month and makes them public. It's a great way to benefit from that peer pressure. I did't make mine in May for the first time this year. I did much better this past month thanks to the encouragement I received here. How important to you think goal-setting is to your writing and in other aspects of your life?
Posted by Susan Gourley/Kelley at 1:43 PM 2 comments:

Email ThisBlogThis!Share to TwitterShare to FacebookShare to Pinterest
Labels: goal setting for writers, The Tigers of Salubria, Website updates

Tomorrow I'll be going to my fourth ever booksigning. Currently only three of my books are in published and I'm still waiting on my author copies of one of those. So I'll only have two books available for this signing, The Greater Good and The Lesser Evil. A Ruthless Good is also out in print, but I haven't received any copies yet.
This is my first book signing involving my fellow Pennwriters and at an outdoor venue. I'm quite excited about the expected crowd and hopeful I'll see better sales than at my previous signings. So today I'm packing my 'stuff' with cautious optimism. I'm driving an hour and a half to reach the farmers' market in Hellertown, PA. At the least, I would like to earn my gas money back and hand out lots of promotion material.
I'm using the boxes my sons brought home from their college bookstore orders. The sturdy cardboard boxes were constructed to hold textbooks and have handles so they're perfect. But I have many more things to organize and stow in some handy-dandy carry baskets. I have some bookplates a friend in CPRW had made for me. I have the beaded bookthongs I designed and made myself. I sell them for four dollar apeice or give them away with a book purchase. It's a good deal. Then I have postcards/book markers from Vista print with my book covers and website information on front and back. Of course, I need my pens and my sales record book. Then is my little tin with mints in, not chocolate since we're outside, that I'll sit out if there's room on the table. I'm gathering one and five dollar bills from my husband and children so I have change to give to all those happy customers.
I'll pack a bottle of water or two and some Rolaids for my heartburn. It always shows up at these events. What am I forgetting? What clever ideas will I learn from my fellow authors as they do their brand of promotion? Any suggestions on what else I might need?
Posted by Susan Gourley/Kelley at 4:18 PM 1 comment: 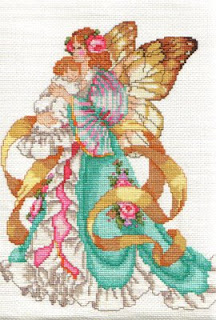 I accomplished one of my goals for this week. I had to share the picture. I really do love to cross-stitch but it has taken a second place to my writing. I've been working on this particular project for nearly two years. Now I did cross-stitch a few book markers during the same time. And I crocheted two afghans also.
Right now, my crafting project is an afghan for my son starting Penn State in the fall. I made one for all my kids in their college colors when they left home. Something of mom to keep them warm on a cold winter's night. LOL.
So here's my cross-stitch, the protector of small children fairy.
Posted by Susan Gourley/Kelley at 12:39 PM 4 comments: