Keepers of Sulbreth, Book #1 of the Futhark Chronicles begins the epic fantasy adventure as one hero searches for his destiny in a battle to save humanity. Cage Stone, half elf and all warrior, answers the call of his king to join the sorceress Keepers in a war against a demonic invasion. But the humans only stand a chance if Cage accepts his elven heritage.

Beyond the Gate, Book #2 of the Futhark Chronicles, finds Marshal Cage Stone and Keeper Sabelline Shelton braving the dark warren beneath Futhark, trying to reset the magical seals that will trap the demons in the depths of the world. But nothing is as expected and soon they're forced to go far afield and make shocking discoveries that may help them or kill them. King Jonared finds his rule under siege from human enemies and the soul-less demons. If Cage and Sabelline fail in their duty, it won't matter. All humanity will fall into darkness.

Beneath the Mountain, Book #3 of the Futhark Chronicles, continues the saga of Cage and Sabelline. The city of Sulbreth is in shambles but the demons are corralled and Jonared returned to his throne. Slowly, the true face of their enemy is revealed though not before he wrecks more damage on the people. Even as Cage and the remaining Keepers figure out the identity of their nemesis, the powerful being sets in motion his plan that may destroy them all. 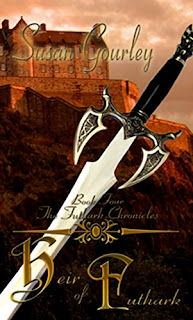 Heir of Futhark, Book #4 of the Futhark Chronicles, brings the war into the open. Futhark's enemy no longer attacks from the shadows. Hundreds of evil-minded men flock to join the killer's army. Only Cage, King Jonared and their companions stand in the way of the enslavement of Futhark's entire kingdom. Simple steel and the Keepers' magic cannot defeat this foe. Cage searches for the weapon they need and will find it only if he can understand the hidden voices of the world he's been connected to since his birth.