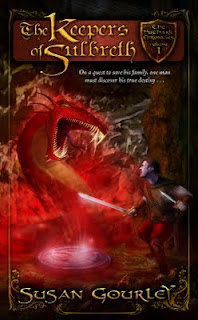 What an exciting day for me. The Keepers of Futhark will be released in January but today I read the first review. Publisher's Weekly posted a review and said many kind things about my book. One little zinger about the start of the book and then everything was roses. I hope someone uses those reviews to make their must read lists.
I know there's often discussions on blogs about whether or not people read reviews to determine their shopping lists for books. I often do just that. ROF used to have pages of book reviews though the space allowed for that in their new, recently rescued, magazine is much less. I bought one of my daughter's favorite books after reading a review for it there. My daughter and I both highlight books each month in RT and intend to buy them. Of course, Keepers won't be reviewed in RT because it's not a romance. The only beef I have with PW was the way they referred to the book as a romantic fantasy. I would rather term it an epic fantasy with a romantic subplot but I won't complain too much if some readers buy it because of the romance.
Do you read reviews and allow them to dictate your must read list? Where do you find your reviews and have you ever felt misled by one?
Posted by Susan Gourley/Kelley at 10:04 PM