Excitement is slowly growing.  The countdown is starting in my head.  Beyond the Gate, Book #2 in The Futhark Chronicles, will be released January 1st.  There is so much to do.  This week I'm doing a final read through and kudos to my publisher.  I'm a third of the way through and have found only one typo.
I had a little phone conference last week about promotion with the Paul and Bridgett from Medallion.  They gave me some great ideas and answered tons of questions for me.  I put some things together already and am working on a few more. 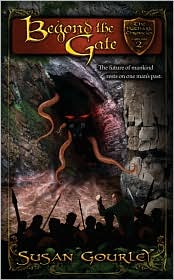 One of the first things I'm working on is a blog tour.  I've never done one though I've visited the blogs of many fellow writers in support of their tours.  One of my questions was when to start it.  Right before the release of my book?  Right after?  How many blogs?
Another thing I've finally set up was my author page on Amazon.  I'm still working on my page for Barnes and Noble online store and Goodreads.  I wonder if anyone ever visits those.  Will it bring me more readers, more sales?
I also have a few short stories in the works I'll be offering for free in various places.  I'm rather excited about the two I've started.  Both are prequels to The Keepers of Sulbreth and will delve deeper into the events that shaped a few of the secondary characters in The Futhark Chronicles.  I know people who've read the first book in the series will be interested in the short stories but will such things draw in new readers?
I'm also compiling a list of reviewers and hoping I can place this second book with more of the fantastic bloggers who regularly review books.  Many of them have hundreds of followers.
I read every blog I find on promotion and networking.  I've read the posts of many talented authors and agents but I'm still unsure if anything I'm doing is reaching prospective readers or only other authors.  Have you found any of the above mentioned promotional plans particularly successful as an author?  Have you discovered or investigated a new author from any of the promotional gambits mentioned?
Posted by Susan Gourley/Kelley at 10:46 PM

Email ThisBlogThis!Share to TwitterShare to FacebookShare to Pinterest
Labels: Author pages, Beyond the Gate, Promotion, The Futhark Chronicles, The Keepers of Sulbreth