Smaug the Terrible vs Kerik the Conflicted

Today one of the most famous dragons in fictional history takes to the big screen. Smaug the magnificent, terrible scourge of death and destruction. The epitome of greed and self-centered existence, Smaug lives in infamy.

Kerik, my dragon, is a more complex character. Not that he doesn't feel many of the same things as Tolkien's scaly creature, but he fights against his dragon nature. As a dragon, Kerik knows he's a superior being compared to mere humans. But because of his upbringing, he cares for some of those puny humans. The dragon Kerik knows that humans are his only natural enemy, yet he takes a side in the human war. 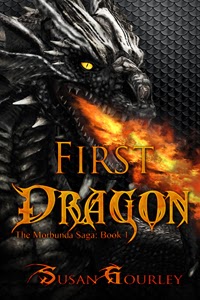 What are the chances more people read about my dragon in the next year than will read about Smaug? Probably about as much chance as me running a 5:30 mile today. But I'm still hoping a little dragon love will spill over to my book, First Dragon. It's had a little sales bump this past week, so I'm hoping.

Are your heading out into the next winter storm to see The Desolation of Smaug in its opening weekend? Did you buy any Tolkien books for gifts this Christmas? Don't forget, today is the last day to get your name in for the wonderful contest at the IWSG site.
Posted by Susan Gourley/Kelley at 1:30 AM