How Realistic Are My Recon Marines?

Today I'm posting at IWSG and talking about building your blog audience. And don't forget Wednesday is the monthly posting of IWSG. Be there!

Today my publisher has put my latest up for sale on their site. Many of you who write for a small publisher who sells books directly from their web page know that the publisher and author make a higher percentage on sales where there's no middle man like Amazon to take a slice. So NCP always keeps new releases exclusively available on their site for the first few weeks. 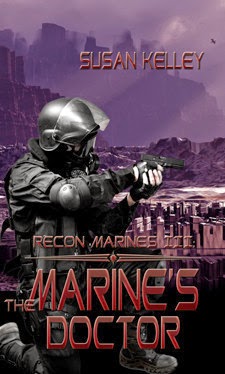 The final book in The Recon Marines series, The Marine's Doctor, revolves around the hunt for the origins of the genetic engineering programs that created the superior beings known as the Recon Marines. Marine Mak joins up with the genius medical doctor and researcher, Molly Drant. They follow a trail of horror, finding evidence of cruel experiments on human subjects. Is it possible mankind would ever allow the type of genetic manipulation that occurs in my books?

I have a biology minor so I know a little about genetics but that field of science has come a long, long way since I attended college. Scientific America has a long list of articles on the work being done in genetic studies. The best use of all the research may be in the possibilities of disease treatment and prevention. A controversial use of the research is in the production of food. How much genetically modified foodstuffs are we eating without knowing it?

But already there are questions about the ethical use of genetic manipulation. Will we use it only to fight and prevent disease or will it be used to create super athletes, geniuses or persons of great beauty? Will the human race end up losing our diversity? In my Recon Marine series, even though each Marine has slight physical differences in many ways they're more similar than they are different. They were designed to intelligent, unusually strong and agile and all had the same skin tone. There's more but you'll have to read the books to learn how far I took the design of those 'super soldiers.'

Do you avoid GM food? Do you know a family that has suffered from a genetic disease such as sickle cell anemia, Tay-Sachs or Huntington's? What good or bad do you believe would come about if mankind develops the skill to manipulate our genes? Isn't my newest cover great?
Posted by Susan Gourley/Kelley at 4:00 AM