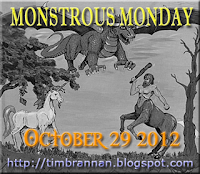 Thank you, Tim Brannan, for giving me a topic for Halloween with this idea for the Monstrous Monday Blog Fest. The purpose is to name your favorite monster. My least favorite real monster is this monster storm predicted for the east coast for the next few days. But I think Tim meant fantasy monsters not weather beasts. 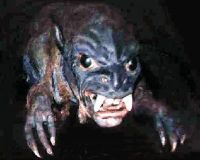 I wasn't sure what to select for this with so many things to pick from. The Chupacabra is a mythical creature that has its origins in the Americas. What makes this creature especially creepy is the occasional sightings and photos that might or might not be faked. The Chupacabra is usually described as a flying creature that drinks the blood of its victims, earning it the nickname of 'goat sucker.' Size varies to rodent-sized(and who doesn't hate a rat) to something bigger than a man. It certainly seems like a demon on earth, doesn't it?

So what monster is your favorite? Ever use one in your writing? Still check under your bed? Visit The Other Side, Tim's blog, for a list of lots more bloggers having fun with Monstrous Monday. I can wait to learn about some new creatures and may learn new facts about others.

Posted by Susan Gourley/Kelley at 4:30 AM